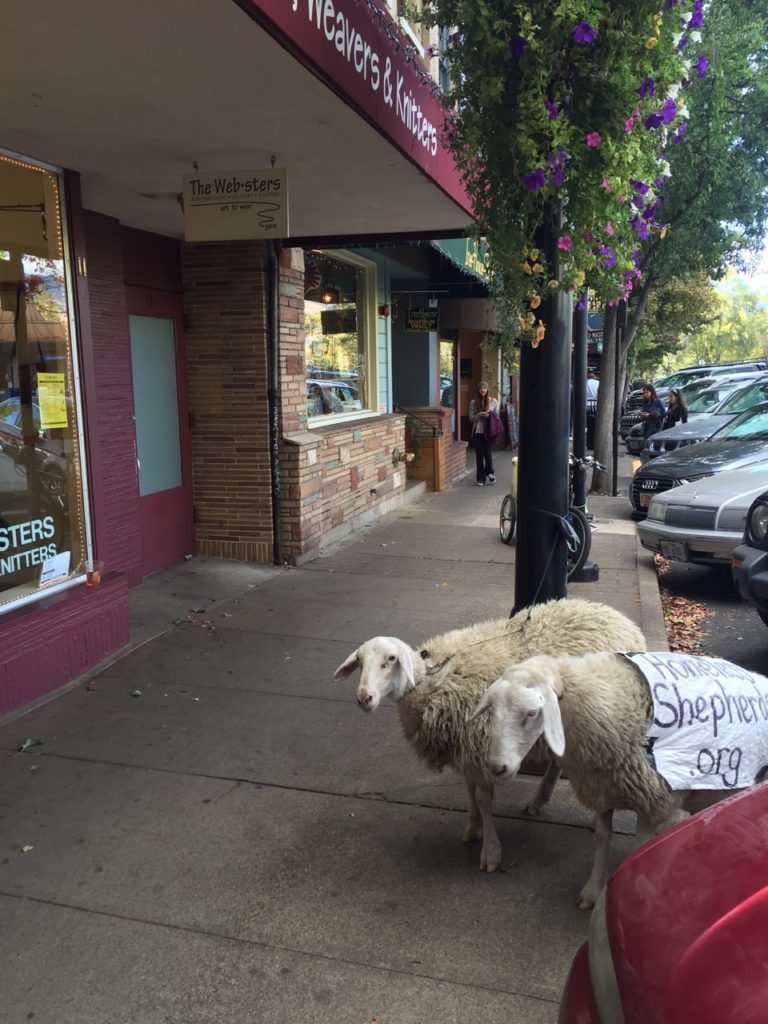 September 27, 2015(I’ve had to repost blogs after the website got hacked) Yesterday i went into Ashland to buy a felting tool that I wanted to try at Webster’s, a downtown wool store.  I tied my 2 sheep up to the pole in front and rushed into the store.  I quickly purchased close to $40 in merchandise and when i came out literally 2 minutes later officer Carpenter who patrols the area was standing next to my sheep telling me that it was against the law to leave animals unnattended in Ashland!  I told him that I was sorry but i just needed to buy something real quick and that there are ALWAYS dogs tied up outside downtown businesses like Louis’ and Martoli’s while their owners go in to dine and that he and the other officers never even stop to say anything to them!?  Officer Carpenter then gave me another one of his tickets, this time for only $110!
Here’s the history; Carpenter has given me 4 tickets now in the last 6 months.  The first ticket was a bogus “keeping of animals”, the second was a bogus “scattering rubbish”(couple pellets shook out of poopcup onto sidewalk and i threw them in the bush?), the third was another bogus “keeping of animals” which caused a newspaper article to be written about it(read it here) resulting in the police chief filing motion to drop the illegitimate charges..but the chief didn’t file motion to drop the first “keeping of animals” charge because that case was already done with and my fine had already been sent to collections!
Here’s the problem;  If the Judge finds me “guilty” of the fourth ticket of “leaving animal unattended” then she and officer Carpenter will likely try to say that i am BANNED from the entire downtown area for 6 months under their new and already questionable “exclusionary zone policy” which states that anyone who receives 3 tickets downtown within 3 months will be banned from coming withing the downtown boundry for 6 months! I already unrighfully suffered for the first ticket by having to stress over the initial injustice, waiting in town for the court dates, stressing over separation from my animals while i had to sit through a actual trial over this, the stress from the judge saying that im guilty and then ignoring me when i repeatedly asked her what specific law did i break, then i suffered by having that fine sent to a collections agency and finally i suffered by having my credit further damaged by not being capable of paying the fine!  If those 2 people are able to unrightfully exclude me from the downtown area that i have been a patron of for over seven years(btw Carpenter doesnt even live in our town but lives in Medford) then God help the rest of you Ashland folk in the future cause one-by-one, neighborhood-by-neighborhood the rich and powerful are trying to push the lower income out of Ashland using their rule of law..its call gentrification!  Ask any Ashland elder and they’ll tell you that rich people have been coming up from California to buy property, pushing their weight around legally to tighten neighborhood association type regulations which drive the locals out..all to raise their(4th home’s) property value?  Well, that’s what Carpenter and the judge are trying to do with me; push me out of sight to raise the perceived “quality” in that area, all for the purpose of price hiking and profit making?  It seems that their profit blinders don’t enable them to see the fun and amusement their tourist are having from the eco-lawn trimming sheep and the honest enrichment that results from having such a diverse yet behaved populace.  United we stand, divided we fall..so if this actually goes down and the first citizen in Ashland is illegitimately excluded without the rest coming to the rescue then i’m not sticking around Ashland to witness the increasing abuse and mistreatment of others.  If so, I will continue to journey for a new community that i can help stand “when the shit hits the fan”!  Please help support the security of our community by supporting me..